Four trade fairs took place in one venue, creating ideal synergies for exhibitors and visitors as well as short routes between stands and a compact presentation.

The regional trade fairs were organised by Messe Düsseldorf GmbH, Messe Düsseldorf Moscow – in partnership with the Russian joint-stock company VNIIKP for wire Russia, and Metal Expo for the other three, Tube Russia, Metallurgy Russia and Litmash Russia.

In all, around 400 companies presented technical innovations from their industries, covering an exhibition space of 5,545 square metres.

As well as Russian exhibitors, many international companies were represented in Moscow, showcasing their products and services to the Russian and Eastern European markets.

Throughout the world good business is being generated by an increasing global demand, the international expansion of glass fibre networks and the prospect of the World Cup in Russia. This is benefiting not only the Russian construction industry, but also international companies that are involved in building Russia’s many stadiums and which are working on infrastructure projects.

Wire, cables, tubes, metal and foundry products are needed for the stadiums, and the forthcoming World Cup is therefore having a major positive impact on the exhibiting industries.

Tube Russia, Metallurgy Russia and Litmash Russia were attended by 4,200 trade visitors, primarily from Russia and its neighbouring countries. wire Russia attracted 2,720 visitors who spent four days finding out industry news, refreshing contacts and initiating business deals. Exhibitors rated their conversations at the stands as highly positive, and many are expecting good follow-up business as a result. 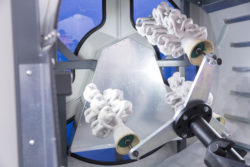